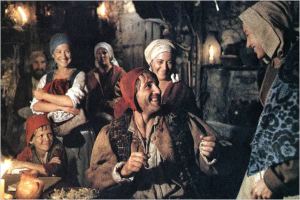 in such a Blog like “multilocality” the best way to say “I’m back” after a fair amount of time is may be to deal in the first post with the issue of return or comeback itself.

The return produces and makes visible some “alterations” (altering, from Medieval Latin alterātiō, change like “Alter ego” means From Latin “other self”; This concept would be used by Michel de Certeau). After a journey a person perceives the changes of himself/herself or/and of the (home) environment in the confrontation with his memories and the memories of the local people.

The return is also an active test for the “comeback kid” to restore or change his/her position in the local “social space” (To use for instance Bourdieu’s terminology).

One of the first stake is the legitimacy of the person. Sometimes it is a concrete identity issue like the identity of Martin Guerre. <<“The Return of Martin Guerre” tells the tale of a man who, after a pre-arranged marriage, abandons his family — but then, following an 8-year absence, suddenly returns to the his native village. However, Martin’s personality has mysteriously changed; where once he neglected and abused his wife, Bertrande, he now acts lovingly and gently toward her. This startling transformation leads some of Martin’s relatives to suspect the man of being an impostor. Bertrande insists otherwise, despite mounting evidence against her “husband”. Soon the villagers have dragged Martin and Bertrande to court in order to uncover the truth.>>(http://en.wikipedia.org/wiki/Le_Retour_de_Martin_Guerre)”.

In the Martin Guerre’s case the tests of legitimacy were helpful to reestablish the identity of the impostor.

The return is not always a pathetic showdown. For instance, when a husband comes back from his office and says “I’m back” as he comes into his house,… too soon.

The “I’m back”  is an extremely current expression in a (multilocal) household-arrangement (and by google hundreds millions of pages) and could be stored in the same box of spatial expressions like “Where are you?” when you reach someone with his/her cellular phone.

In a multilocal residential system people are always in an ambivalent situation: it’s a comeback in a geographically, temporally and somehow socially  fragmented space but also the social continuation of a personal unique place (even if spatial fragmented). He/she goes home from home.